7ru7a21 wrote:got it. what does waopointers do? and why is it that if i start editeig by pressing 4 then 4 agan to stop it. then i restart the map but ther's no edit in it ? u have two files in the maps u share us, how?

Waypoints are where the bots can move around. It's how they see around the map when there are no players around. And when you restart the script, it creates a whole new edit file. You can't go back to an older edit with the editor. If you messed something up you would have to edit it in text form.
Top

petrolhead wrote:Great Mod! But it seems like i'm unable to load more scripts, is this normal?

Yes, older mods won't load in the new InfinityScript. You have to recode them or ask the original developers to recode it for you. Or just not use them at all

I fully edited my admin script to IS1.5 and it worked for a few times with AI but not anymore.. whenever i start my server it crashes when all script are loaded, including my admin script.. it al looks fine and there is no error or something in the console or the logs so i'm a bit lost

it makes it less fun to run a server when you can't load more scripts.. help me out?

AIZombies doesn't really work with other scripts. It is such a big mod that MW3 itself can barely handle it. Loading extra stuff is too much for the game. The whole point of this script is for the gamemode; Just the gamemode. Anything extra won't work yet because of the memory limitations.
Top

Slvr99 wrote:Hello everyone!
The time has finally come! This project has been under development for probably (more or less) a full year now. I wanted to make this sequel since I devised a way to actually create AI in InfinityScript a while back with an older gamemode I created. So finally the time comes to release this gamemode!

This is AIZombies Supreme, which is a port/sequel of AIZombies from MW2. There are a lot of features brought over from the old MW2 mod and a bunch of new features only in this version! The main objective of AIZombies is to survive the waves of the bots. There are 30 waves of bots in regular mode and 20 waves in Hell maps. This wave count can be changed in each map's file either with a text editor or with the map editor script. Bots get increasingly harder and more spawn with each round. You gain points just like in MW2's AIZ and can use them to buy a new weapon or perks. Weapons can be upgraded just like in the MW2 version and upgraded guns are more powerful and have extra features.

Here is a features list for this sequel(Text in bright white are new features):
Random Weapon Box - Buy a random weapon
Gambler - Gamble your points to get something random anywhere from losing all your points to getting a free extra weapon
Bank - Deposit your points into the bank and withdraw them in any future games. Yes, any future games. Even after rejoining the game or joining a completely new server!
Perks - Buyable perks to help you fight
Killstreaks - Earn killstreaks to aid in killing the bots or help out your team. Some new, some old.
Upgrade Machine - Upgrade your gun for more damage and ammo
Teleporter - Linkable teleporter in the style of Black Ops' Kino Der Toten teleporter. After time runs out, you are teleported back
Bonus Points - One bonus point is awarded per kill. Use them to buy extra killstreaks
Crawler & Boss Waves - Every 5 rounds will trigger a special wave of crawlers or boss bots
Ammo Crate - Buy ammo if you run out and would rather keep your weapons
Glowstick Distractor - Similar to Monkies from Black Ops, these glowsticks distract bots from any players so you can kill them easier
Elevator - Just a box that flies you higher or to different areas
Power Box - Buying power activates perks and other features on the map

About Making Maps:
There are a lot of default maps made by me to use for the game if you do not want to make your own maps. All maps including DLC has at least one map, usually more than one, available to use. But you can also create or add your own maps to your server with one of two methods. For people who like to map the old MapEdit style, the map files are very similar to the MapEdit map files. They differ by file extension and added features. Map files are located in scripts/aizombies/maps/ and are shown as mapname.map. Maps also need waypoints for the bots to know where to walk around at. Those are located in the same directory and are names mapname.wyp. They can also be edited with a text editor and are a list of waypoint coordinates. If you would like to see the full list and syntax of map elements, go Here.
If you would like to use my much easier and user-friendly AIZombies Map Editor script, download it here.

A screenshot of the map Desert Outpost(Dome). Pictured is the HUD, the weapon box, ammo box, and a zombie coming towards the player. 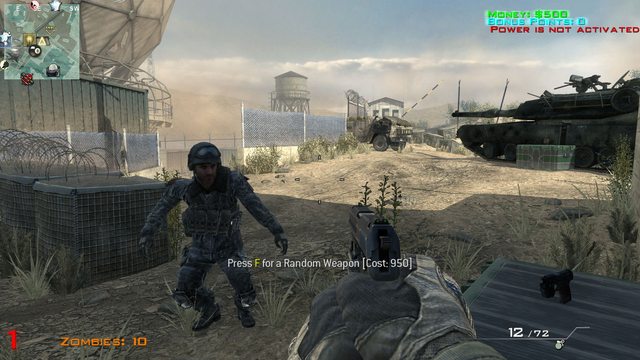 TO RUN THIS SCRIPT YOU MUST BE USING INFINITYSCRIPT 1.5!! Go to THIS LINK to download the current InfinityScript version. This means most scripts (scripts made in original IS) will not load in this version. You must re-code your script in this new version for it to work.


Download: AIZombies Supreme v1.0 with maps and server config
http://www.mediafire.com/file/h278c98aa ... elease.rar
DLL VirusTotal
Included in this .rar file is all the directories to make AIZombies function correctly. Just copy and replace all folders in the .rar to your MW3 server directory. In the admin folder is pre-made server config files for easy use. You may edit these to your liking. In scripts is the AIZ script and the aizombies folder for the config file(generated at runtime) and default map files. When the server runs AIZombies will auto-update when there is a new version available.

Thanks for downloading/playing and I hope you have fun killing some AI Zombies!!

Credits: Thanks to Dragon3989 and arrow for contributing additional ideas and bugfixing/testing. Thanks to Frederica Bernkastel for the memory scanning base code from his admin script. And thanks to the community for not believing in this project! (No really, nobody believed it would release =P)

Troubleshooting:
The AIZombies script won't load in my server!
Make sure you are using the newest version of InfinityScript 1.5. You can download it here: viewtopic.php?f=76&t=38544

Other scripts won't load in my server except for AIZombies!
The new InfinityScript that AIZombies uses will not load old scripts. In order to use older scripts you must either contact the developer of the script to recode it in IS1.5, or if there is a source available then you can recode it yourself. Otherwise just don't use those scripts for AIZombies. AIZombies works best without added scripts anyways.

I got an error in the console while playing the game mode
Reply to this thread or PM me with the full error you got. From there I can try to fix it in future releases.

Everyone in the game got kicked with an error saying "CL_CGameNeedsServerCommand: A reliable command was cycled out."
Unfortunately, this is a bug that I cannot fix at the moment. If you get this error, just rejoin the server.

My problem is not listed here
PM me or reply to this thread with your problem and I will reply to you with a solution, if there is one.

Thanks for the help. I opened a server 24/7 whit your script and the people really enjoyed it

. the only thing is that I wrotte 8 players as a total to play whit but only 5 can get in. it says server is full but in the server list it looks 5 of 8
Top

fabip wrote:Thanks for the help. I opened a server 24/7 whit your script and the people really enjoyed it

. the only thing is that I wrotte 8 players as a total to play whit but only 5 can get in. it says server is full but in the server list it looks 5 of 8

The max player amount is actually half of what you set. For example, if you set 16 max players, only 8 can join.
Top

http://lmgtfy.com/?q=mw3+models+list
Not that hard to find
Top

http://lmgtfy.com/?q=mw3+models+list
Not that hard to find

allready done that but i tought u had more

i appreciate your work

Well i waited for this script from a long time .. and i am glad to see that slvr99 has worked too hard on it ....
i appreciate your work and i hope new updates will be grt..
Top
Post Reply
87 posts

Users browsing this forum: No registered users and 4 guests